Water from precipitation can be broken down into two elements depending on its transit speed in the water cycle. The distinction between blue water and green water was first proposed by Falkenberg in the work published in 1995.

When it rains, one part of the water that reaches the ground contributes to what is known as blue water (from surface run-off and percolation to the groundwater table). The rest constitutes green water: 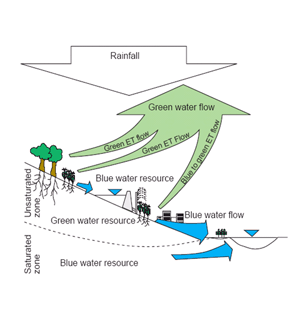 Blue water is used by businesses and households and generally returns to the cycle after it has been treated. Blue water used for agricultural purposes (irrigation) or collected in woods, however, is not returned to circulation but stays linked to agricultural products or is transpired to return to the atmosphere as green water.

Green water is necessary for feeding and maintaining processes at the heart of the ecosystems as well as the functions, goods and services generated by these ecosystems. At the same time, it can be used to provide blue water to society. Adaptation to climate change will need to consider how this trade-off is managed to ensure a steady supply of water to trees, animals and humans.

In addition to maintaining a healthy ecosystem, forest ecosystems contribute to regulation functions and related ecosystem services: regulating ecological processes, biogeochemical cycles and biospheric processes. Further, forests actively contribute to the regulation of carbon balance levels, the climate (via actual evapotranspiration), the regulation and supply of water, to soil formation and conservation and to the cycles of mineral elements.

The management of watersheds modulates the flow of water both upstream and downstream; the head of a wooded watershed area produces green water upstream and reduces blue water downstream.