What is the soil water reserve? How is this measured?

Soil water reserve is defined as the volume of water contained in the soil at a given time. This volume of water is generally expressed in the height of the water content (mm), easily comparable to that of rainfall and evapotranspiration. It is a dynamic variable that changes over time, influenced jointly by rainfall and evapotranspiration. However, all soil water is not available to be utilized by plants, either because the roots have not colonized the entire volume of the soil or because the water is too firmly retained by the soil to be extracted by the roots.

What is extractable soil water?

An example of a clay-silt horizon water-retention curve (also called pF_humidity curve). High levels ​​of pF correspond to low moisture levels in the soil.
The extractable soil water (RU) is the fraction of the soil water reserve available to the plant, or that which can be extracted by the plant through root suction. It is expressed in millimetres of water. It is a state variable, which depends on the physico-chemical properties of the soil, its particle size, on the arrangement of soil particles and porosity distribution. The soil water available to the plant is equal to the volume of water stored in the slice of soil containing the root system between two water content characteristics: the field capacity (the amount of water held in the soil following gravitational water flow) and the permanent wilting point (beyond which plants can no longer extract water). This amount of water available to the plant is determined strictly by establishing water retention curves (also called pF-humidity curves) on undisturbed soil samples taken from each soil horizon (cylinder or clods). As an optional default, coefficient tables (see table below) or functions can be uesd to estimate the soil moisture characteristics at these two states by considering slightly more complex properties (texture, carbon content, density, cationic exchange capacity ...). It should be noted that few functions exist that are calibrated specifically for forest soils. Use of these functions for agricultural land can lead to biased results.

How can water status and soil water reserve be measured?

The soil water status can be characterized in situ by considering the bond of water to soil particles (suction, also called water potential) or by the amount of water contained in the soil (humidity). Monitoring soil moisture levels over time can be achieved by taking direct measurements (mass humidity of soil samples), or through indirect measurements considering relationships between physical or chemical soil properties and its water content. Volumetric water content can be determined through neutron scattering measurements, electrical conductivity or dielectric constant measurements of the soil. The state of water binding is quantified by the soil water potential; negative when the water is bound to the soil and null when water is free. The amount of water (in mm) contained in a soil layer is equal to the product of the volumetric water content expressed as a percentage of its thickness (in decimetre). The soil water content is defined as being the sum of water contained in each layer of soil. However, as all soil water is not usable by the roots, it is never measured at zero as even under severe drought conditions, the remaining water is too firmly bound to soil particles.

Soil auger drill: a soil sample is extracted and weighed, then dried in an oven at 105 ° C to determine its mass water content

Two examples of equipment used to measure volumetric water content by the time domain reflectometry (TDR) measurement technique either by using waveguides inserted into the soil (left: Trase model) or by moving the probe to a tube (right: Trime model) 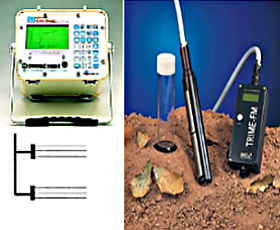 
How is extractable soil water measured?

1. By measuring the total soil thickness containing fine roots. This is the first potential source of imprecision facing the forester. As such, direct observation of a trench wall often proves useful. In the absence of obstacles (slabs, stones) the rooting depth of adult trees usually measures at least 2 m. 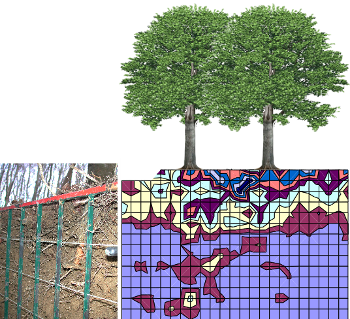 Map of the distribution of fine roots, performed by counting the roots on a trench wall using a square grid measuring 10 cm x 10 cm. Colours indicate the different root densities.

2. By determining the porosity of the soil layers (horizons) by considering three distinguishable components: texture, coarse elements, structure. For BILJOU ©, it is also important to define the layer boundaries which will depend on the distribution of fine roots, which in turn determine physical constraints influencing their vertical distribution. In BILJOU ©, a layer is a hydrodynamically homogeneous compartment containing fine roots. Once the boundaries of the different soil layers have been identified, it may be useful to take a sample of fine soil to measure texture. This is usually detectable through touch.

3. By assessing the extractable water content in each soil layer in measured in millimetres, the point between the humidity percentage of field capacity and the permanent wilting point. In the absence of retention curves for the studied soil, extractable water can be estimated, as described above, by using tables (example below).

5. By estimating the proportion of bulk elements or coarse-textured soil (% of soil volume).

7. By adding these values taken throughout the entire depth of rooted depth

How is soil water absorbed by the root system?

The water potential gradient, primarily driven by transpiration, allows trees to extract water from the soil through suction. The soil water is absorbed by the non-suberized fine roots and will often function in association with mycorrhizal fungi to "drain" water to the roots. 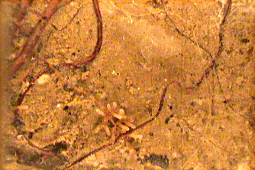 Fine roots and mycorrhizae of laccaria fungi observed in oak in a forest soil using an endoscope (photo N Breda, 2008) 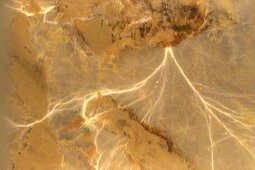 Extra-matricial hyphaes of a mycorrhizal fungus spread widely in the soil and increase the water and nutrients absorption area. Observations made in oak forest soil using an endoscope (photo N Breda, 2008)


The efficiency of a root system depends on: 1) its spatial extension particularly its depth, 2) its water absorption capacity at low water potential (water firmly bound), 3) its potential for length growth, especially when the soil is re-watered following a drought. The path of water (and of solutes) between the soil and the tree is controlled by well-established biophysical laws, which are based on principles of liquid phase diffusion in porous media and osmotic mechanisms. This path consists of three steps:

Anatomical cross section of a root..

How is the soil water reserve used by trees ?

When the soil is wet, water is easily absorbed through light suction; the rate of absorption is proportional root density. As such, the upper soil horizons provide trees with more water than deeper horizons as this is where the majority of roots are located. During a drying period, absorption by the soil is initially evenly distributed to cover the whole rooted zone; water uptake is then limited to deeper levels where water binding to soil is less strong. During a period of severe drought, only the deepest layers of soil have the capacity to provide the tree with water. Transpiration flow, at this stage, is driven by a relatively low percentage of deep fine roots. The degree to which each soil layer contributes to the trees water supply varies according to season and depends on the facility of water extraction.

The figure below shows the distribution of extractable soil water in the permanent plots within the RENECOFOR network. These estimates represent soil descriptions and rooting depth; texture and coarse elements were then evaluated and textural coefficients were applied.