How is this defined?

Precipitation interception refers to water, in liquid or solid form, that is intercepted by tree crowns, both leaves and wood bodies, before it falls to reach the soil. During this process of precipitation, water will enter into the ecosystem by several paths :

Note : We have chosen not to address snow interception, a phenomenon which is to date not fully understood and supported by surprisingly few published studies, nor do we address fog interception (production of liquid that will fall from the canopy to reach the soil).

How is this flow measured? What unit is used for this measurement?

Interception cannot be directly measured but rather is calculated as being the difference between incident rainfall and throughfall, by using the following formula:
In = Pi – Ps - Pt, in which In represents the interception, Pi the incident rainfall, Ps the rainfall which reaches the soil through the canopy and Pt, the stemflow. 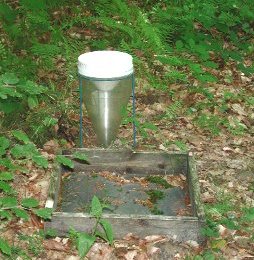 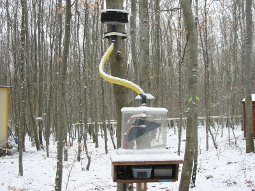 Above : A system for collecting rain flowing down the trunks (photo UR BEF, INRA-Nancy).

Opposite : Measuring rain that reaches the ground by using a network of rain gauges for direct reading.

Measurements are performed by using rain gauges: for Pi, a reference rain gauge is placed near the studied plot in a clearing or placed above the canopy. Ps is measured with a set of rain gauges located at ground level. As rain that reaches the soil has a high spatial variability, accurate measurement requires placing a large number of rain gauges under the canopy, often as many as 20 to 40. Lastly, Pt is measured by collectors arranged in a spiral or a ring around the trunks (often between 5 and 10 replicates in a stand). Each collector is connected to a large capacity container. These terms are measured immediately following each rainfall event.
Precipitation interception is expressed in mm of water. For example, rainfall rendering 5 mm of water can lead to interception of 1 mm for a net gain of 4 mm for the forest. In is often expressed as a percentage of incident rainfall: In our example rain interception is 20%.

How is this water flow controlled?

Rainfall interception is interpreted by its physical aspects and depends on the intensity of the rainfall, on the leaf development (leaf area index, see the page Phenology and Leaf Area index) and on climatic conditions. During and after a rainy period, the evaporation rate will depend on the energy arriving at the crowns that can be measured by potential evapotranspiration (PET, see the page Meteorology).

Relationship between rainfall interception (% of the incident rainfall) and leaf area index (LAI) taken from European beech and conifer stands.
Light rainfall is intercepted more than heavy rainfall: consequently, for a fixed amount of rain, rainfall interception is higher in oceanic climatic conditions than in continental climates. Phenology clearly plays an essential role in this process, particularly for deciduous stands: interception is lower in winter than during leafy periods.
Variation in interception in stands relates to their leaf area index (see figure), but this relationship is complex: it has been observed that if on the whole In increases with LAI, some stands will show higher interception rates than expected. This is particularly true for shallow pine canopies or stands that have just experienced thinning.

Note : during the interception process when leaves or needles are wet, tree transpiration slows or stops altogether. This is taken into account by the Biljou model.

How does quantity vary over time?

With the start of rainfall, the canopy begins to accumulate water on its interception surfaces. When these surfaces start to saturate, water then flows downwards. This defines the saturation capacity of a canopy, which is the maximum amount of water that can be stored. Typically this capacity is between 1 and 2 mm: it is higher for coniferous with high leaf area index and lower in broad-leaved stands.

How does interception vary spatially?

Rainfall interception is spatially a highly variable phenomenon and is linked to heterogeneity in the canopy structure. Measurements show that, just following rainfall, some rain gauges placed below the canopy capture very little water, while others receive more than the incidental rainfall! This phenomenon is known as the funnel which is rainfall that has been locally concentrated by preferential flows in the crowns. Aussenac (1970) also showed that throughfall depends on the distance from the canopy to the trunk.

Rainfall interception is highly variable and is dependent on species, management techniques, climate and season variability. However, we can provide a few ranges. In temperate climates, rainfall interception varies from 15 to 40% of the incident rainfall. Overall, conifers intercept more rainfall (In representing between 30 and 40%) than deciduous trees (In representing between 15 and 30%) for two main reasons: conifer stands generally show a higher leaf area index and, with the exception of larch, they bear leaves throughout the year. Thus, in the same climate conditions, evergreen stands are often characterized by lower water availability in the soil than deciduous forests.
Additionally, stemflow (Pt) is highly dependent on tree species. Two extreme examples are beech, which has smooth bark allowing Pt to reach or exceed 10% of the incident rainfall, as opposed to species with coarse bark, such as oak, where the Pt represents only about 1 to 2% of rainfall. When stemflow is relatively low, this water flows remains in the soil at the base of the tree.

Mean values ​​of rainfall interception as % of incident rainfall measured in RENECOFOR stands in the French forest service observation network.